Everything you need to know

Human Serum Type AB, also known as Human AB Serum, may be described as blood plasma, where all cells and clotting factors, such as fibrinogen have been removed. It does not contain any white/red blood cells or platelets. All proteins that are not used for clotting, as well as antibodies, antigens, hormones, and electrolytes are preserved during the filtration process.

In cell culture, Human serum is used to provide your cells with a physiology that more closely resembles the natural state, when compared to other sera, such as Fetal Bovine Serum (FBS). Therefore, human sera may be superior to animal sera when culturing sensitive human cell lines, such as macrophages or lymphocytes. Further, it is used in control assays, immunoassays, clinical chemistry, and in vitro diagnostics. Our Human Serum is obtained exclusively from healthy male donors in FDA-licensed facilities located in the USA.

Our Human Serum is obtained exclusively from FDA-licensed facilities in the USA.

What is Human Serum?

Find out more about Human Serum.

Our official instructions for use.

Have a look at our Human Serum products at a glance.

Dive into the product specs.

Fill in our simple sample form and try our Human Serum!

What is Human Serum?

As the name already suggests, Human Serum is obtained from healthy male blood donors. In principle, it could be described as blood plasma, in which all cells and clotting factors (e.g., fibrinogen) have been removed. To maintain the growth promoting characteristics of serum, all proteins that do not partake in the clotting process, as well as antibodies, antigens, hormones, and electrolytes are preserved during the filtration process.

Serum obtained from blood group AB-donors is particularly beneficial, as it does not contain any anti-A or anti-B antibodies, which could trigger an unwanted immune response. This is of particular interest in cell therapy research.

Why use Human Serum in Cell Culture?

In cell culture, human serum is of utmost importance for research of the human organism. It allows scientists to cultivate human cell lines, test novel drugs, and gain a deeper understanding of the immune system.

Human Serum is used for various applications, such as:

What is the difference between Human Serum and Fetal Bovine Serum (FBS)?

Many of the above-mentioned applications are important key players in medicine. Therefore, it is crucial that immunogenicity, introduced by a foreign species, is avoided. In other words: Animal-derived components (e.g., the proteins and growth factors in animal serum) could provoke an immune response within human cells. Human Serum is xeno-free, meaning that it contains no components of a foreign species.

Hence, human serum is considered to be superior to animal serum when culturing human cell lines, especially immune cells – such as macrophages or lymphocytes – or in any other application, where immunogenicity could be an issue. Scientists often use human serum as supplement to cell culture media.

Scientists often use human serum as supplement to cell culture media when culturing sensitive human cell lines, as it is considered to be superior to animal serum.
How is Human Serum obtained? The role of Human Serum in drug developement

How is Human Serum obtained?

Traditionally, blood was drawn from healthy human donors and the blood cells were separated from the plasma by centrifugation, which was further processed into serum.

Capricorn’s Human Serum, like most Human Sera nowadays, is obtained by plasmapheresis. It is a procedure similar to dialysis, where whole blood is separated into cellular components and plasma by a medical device. The plasma is collected and replaced by a colloid fluid, e.g., saline, which gets recombined with the blood cells and reintroduced into the donor’s blood stream.

Serum and plasma are very similar, the only difference being that serum does not contain any clotting factors, the main one being fibrinogen. This is important, as clotting or coagulation needs to be avoided in most applications.

The role of Human Serum Albumin

Within the human bloodstream, important molecules, such as lipids, hormones, vitamins, minerals, and waste products are transported by blood proteins. Often, these are also referred to as plasma proteins and include, e.g., albumins, lipoproteins, glycoproteins, and α, β‚ and γ globulins – of which albumin (human albumin) is the most prevalent.

In modern drug development, researchers make use of the serum’s binding capacity to deliver the drug to the desired site of action. The drug is transported by plasma proteins and circulates through the bloodstream.

The most prevalent and important plasma protein is human albumin. Drug manufacturers worldwide use it to design protein-binding medications that can circulate the bloodstream.

Do you offer any treatments for your Human Serum?

Yes, we do. We offer heat-inactivated Human Serum and other treatments upon request.

Please contact us on this matter – we are happy to help!

Should I heat-inactivate my Human Serum?

It used to be common practice to heat-inactivate various serum products and in fact, many protocols still do call to do so.

In general, we do not recommend heat-inactivation unless you are entirely sure as to why you are doing this! Most cells do not require heat-inactivated serum to grow. Please examine your experimental setup, whether this procedure is really necessary for your cells.

What is the difference between Human Serum and Fetal Bovine Serum (FBS)?

As mentioned above, Human Serum resembles the physiological environment of the human organism more closely than, e.g. FBS.

Therefore, when working with sensitive human cell lines, such as macrophages or lymphocytes, it is recommended to use Human Serum instead of animal serum. Animal serum may provoke an unwanted immune response that could alter the results of your experiments.

At which concentration should I supplement my growth medium with Human Serum?

To answer this question, you will have to experimentally determine the right concentration of serum for your cells.

Most scientists supplement their growth media with a serum concentration between 5–20 %.

How is your Human Serum shipped? What are the shipping conditions?

Your Human Serum will be shipped in a frozen state on dry ice.

Should have any further questions on this matter, please do not hesitate to contact us – we will be happy to assist you.

The delivery took longer than expected and my serum arrived slightly thawed. Is it still OK to use?

Unfortunately, we cannot control all aspects of delivery, such as delays of the courier, and on rare occasion your serum may arrive slightly thawed. This is nothing you need to worry about.

Should this happen, please thaw the serum completely, swirl gently to homogenize and refreeze for further use. Any precipitation you may see is not toxic and will not affect the performance of your serum.

My Human Serum has precipitation. Is it still OK to use?

Precipitation of serum products while thawing is very common and nothing you need to worry about. In fact, even when thawing the serum correctly, small amounts of precipitation may occur. This is due to salt and protein gradients that form crystalline/flocculant structures.

In order to avoid precipitation, you may follow these steps:

We do not recommend filtration of precipitates, as this may remove valuable nutrients from the serum.

Why is your Human Serum only from male donors?

This question is best answered by looking at a fundamental process during pregnancy: the immune system's response to foreign cells.

Generally speaking, all healthy cells carry small peptides as an "identity card" on their surface - the major histocompatibility complex (MHC). If the MHC contains a "self"-peptide (a signal for "self"-identification), the immune system does not answer with an immune response. It is the same mechanism by which, e.g., a virus or foreign tissue triggers a response.

Now, during pregnancy, the immune system of the mother could produce antibodies against the MHC peptides of both the father and the fetus. To avoid rejection, the fetus in turn does not produce many of these classical MHC peptides. Instead, it produces non-classical MHC proteins that regulate maternal NK (natural killer) cells.

Yet, the mother's antibodies would still be present even after pregnancy and lead to complications in the further use of human serum. This is why human serum from male donors is far more common than from female donors.

How to thaw your Human Serum product

You can thaw your Human Serum overnight at +2 °C to +8 °C. Swirl gently to homogenize.

Should you experience precipitation when thawing your serum, this can be avoided by the following procedure:

Cryoprecipitation occurs due to salt and protein gradients, which can lead to formation of crystalline or flocculant structures. Please note that these precipitates are not toxic and do not affect the performance of your serum. In fact, small amounts of cryoprecipitation is considered normal.

The following guidelines will help to ensure the integrity of your serum product:

If you have been previously supplementing the growth medium for your cells with FBS and would now like to switch to Human Serum, we recommend the following: 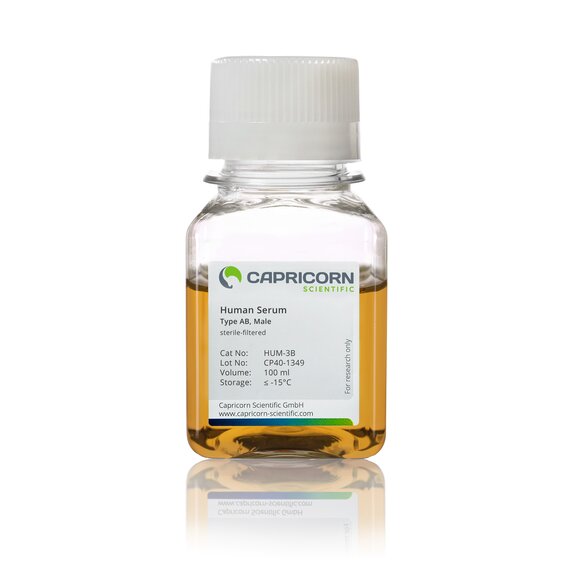 YOUR BENEFITS AT A GLANCE

Get your free sample!